Naim al-Hamed first came to the attention of the general public on Friday, March 25 as the 28-year-old Syrian from Hama named as a suspect in Brussels bombings.  According to a report in Le Monde on Saturday, his DNA was found in the rue Max Roos apartment used by the known perpetrators of the attacks.  He arrived in Europe on September 20, 2015, with Mounir Ahmed Alaaj, aka Amine Choukri, aka Sofiane Ayari, the man who had fled the rue du Dries apartment with Abdeslam and was later caught with him at Abdeslam’s aunt’s apartment.  Al-Hamed and Ayari had confirmed contact with Abdeslam in Ulm, Germany, on the night 2-3 October 2015. END_OF_DOCUMENT_TOKEN_TO_BE_REPLACED 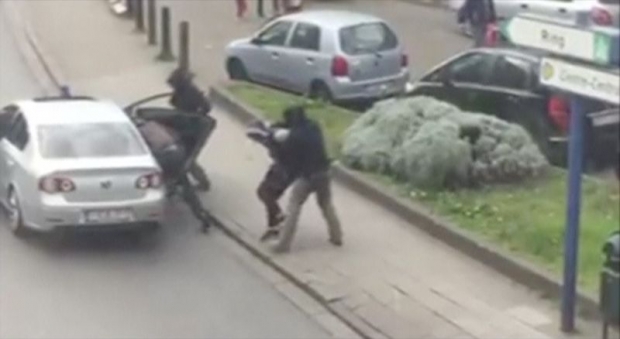 Friday was a busy day for Belgian law enforcement with multiple operations resulting in the arrest of the last remaining publically-revealed fugitive from the Paris attacks, Mohamed Abrini.  In addition, a recently revealed suspect, Osama Krayem (sometimes seen as Oussama Kraiem), known until now as Naim al-Hamed, was also captured.  In all, six individuals were arrested, the others being Hervé B.M., Bilal El Makhoukhi, and two possibly unrelated individuals named Assia B. and Chaouki A.  The last two may have been swept up inadvertently for being close to the operations and acting in a manner suspicious to police.  Politico early on named another individual as Abu Amrid, but nothing further was ever reported on that, and I would take it with a grain of salt as this topic is not their bread-and-butter. END_OF_DOCUMENT_TOKEN_TO_BE_REPLACED

I’m a great believer in the value of “taking back-bearings,” a phrase I picked up reading the exploits of George Smiley.  Normally this means something like determining one’s current position by relating it to known points visible to the observer and easily identified on a map.  In my case, I mean looking back at previous events, incidents, and cases to help understand the present, and often, the mistakes made in past responses that helped contribute to it.

I’d like to do that in this article by taking a look back at one of the first high-profile (at least in terrorism circles) cases involving the online radicalization of young men leading to terrorist plots in their own countries.  On October 19, 2005, Bosnian police arrested two young men at an apartment in the Butmir district of Sarajevo following an 8-month operation involving the secret services of 9 different countries.  The two, a young Swede born in Novi Pazar, Serbia, named Mirsad Bektašević and a Dutch-Turk named Abdulkadir Cesur were caught red-handed with an arsenal of explosives and guns.  The police also discovered a video of the culprits expressing their intent to strike at those governments involved in the oppression of their Muslim brethren in Afghanistan, Chechnya, and Iraq.  Their strike was probably going to be against the British Embassy in Sarajevo. END_OF_DOCUMENT_TOKEN_TO_BE_REPLACED